Today is World Bread Day. A day where bread bakers around the globe come together to celebrate the staff of life.

Throughout history, bread has played an integral role in feeding the masses and in commemorating important traditions and events. Each bread tells a unique story and carves a place in time. Some say bread (or the lack thereof) has been responsible for the rise and fall of kingdoms. All I know is that I like it and I’m happy to be celebrating it today.

As with all bread, there’s a story behind this braid.  It’s actually a story within a story. It all began when Tanya, one of the Bread Baking Babes, suggested that we make Caucasian Bread for World Bread Day.

I know what you’re thinking… what in the world is Caucasian Bread?  Well, it doesn’t have anything to do with white bread. It refers to the geopolitical region at the border of Europe and Asia which is situated between the Black and the Caspian sea. Home to the Caucasus Mountains. To alleviate any confusion with the name, Tanya renamed our version Russian Braid. I went a step further and named it Russian Mountain Braid. You’ll find out why in a minute.

This bread is a beautiful braided bread that is baked in a spring form pan to help hold it’s shape. It’s supposed to end up looking like a rose. 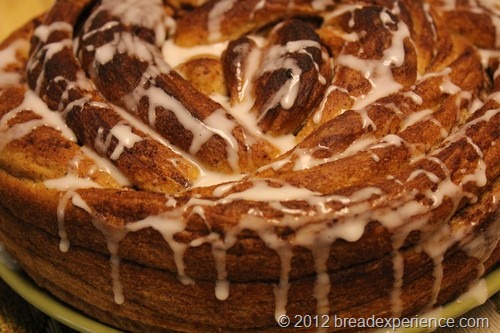 My son was home from college for the weekend and when I took the bread out of the oven, I asked him if he thought it looked like a rose. He said “I can see that, but I can also see mountains.”  My son is very witty and his analytical mom usually has a hard time keeping up with him. I thought he was making a joke because we had just been talking about the origins of Caucasian Bread. I immediately laughed, but he wasn’t joking. He really thought it looked like mountains. So I decided to go with that theme. I developed it further by drizzling a white glaze over the braid to form the mountain peaks.

So there you have it … Russian Mountain Braid.  You might need to use your imagination to see the mountain peaks. 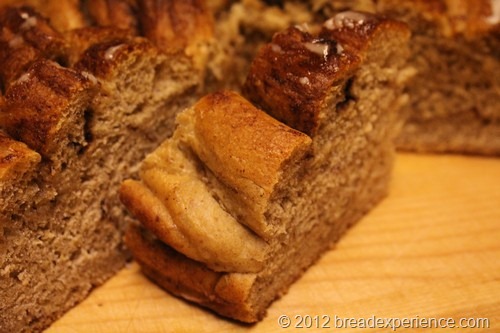 Some of the other Babes made a savory version of this bread.  It’s filled with pesto and parmesan cheese. Although that sounded divine, I went with the sweeter version. My version is made with sprouted wheat flour and filled with melted butter and cinnamon sugar and drizzled with a powdered-sugar glaze.

My adapted recipe is below.  If you want to make the savory version, check out Tanya’s post. 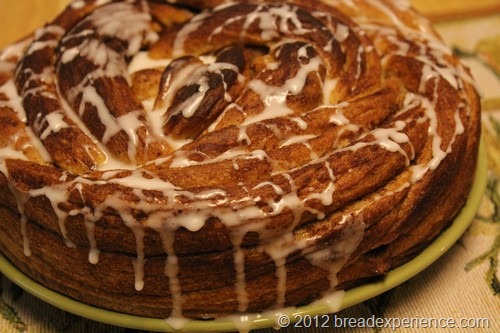 Add all ingredients (except the water) in the bowl of a stand mixer. Add in the water gradually as you mix the dough.  You may not need all of the water or you may need more if you are using Einkorn. 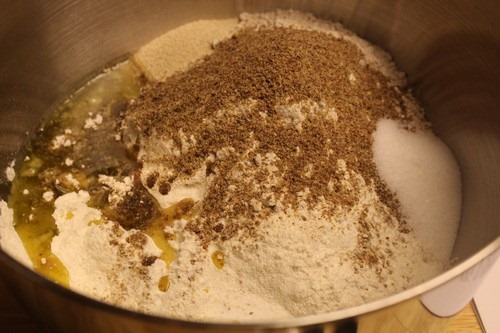 When dough is ready, spray a bowl with oil and gently put the dough in the bowl. 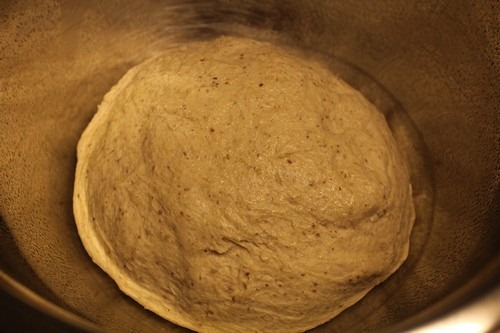 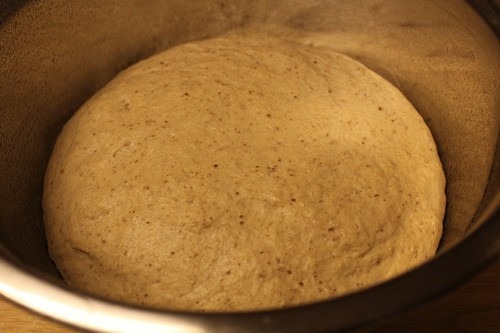 3) Roll out the Dough

Lightly flour your work area. Flatten the dough gently with your hands.
Roll the dough as thin as you can using a floured rolling pin. When rolling out the dough, try not to lift and move it too much. 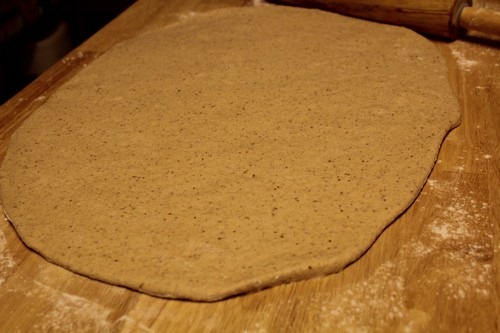 Apply a thin layer of your filling on top of the dough (leave the edge clear 1/4").  I brushed the dough with melted butter then sprinkled it heavily with cinnamon sugar. 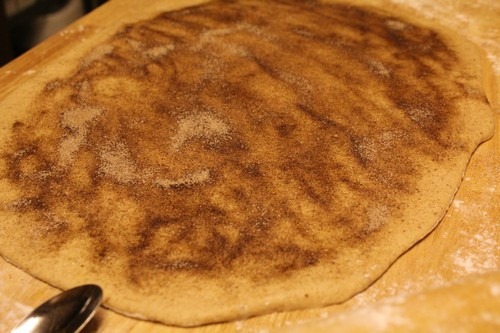 Slowly, tightly and very gently roll the dough into a log.  You will now have a very long log. 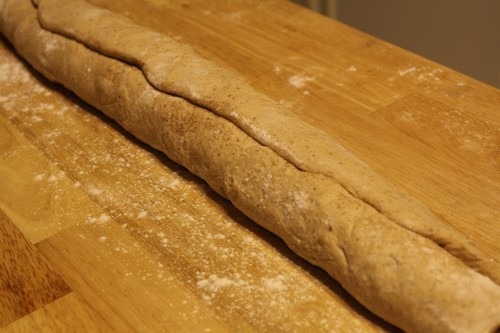 Take a sharp knife (not a serrated knife) and cut the log lengthwise. Try to keep the knife in the middle of the log so you end up with two equal parts. 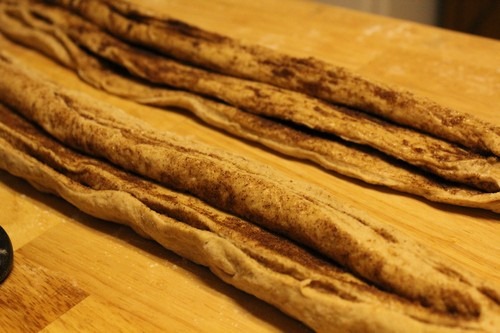 Place the two halves crossing each other (open roulade layers facing up) to create and X shape.  Gently pick up the two ends of the bottom half, cross them over the top half, and place them back down.  Continue this process, taking the two bottom ends and crossing them over the top until all the roulade has been used. 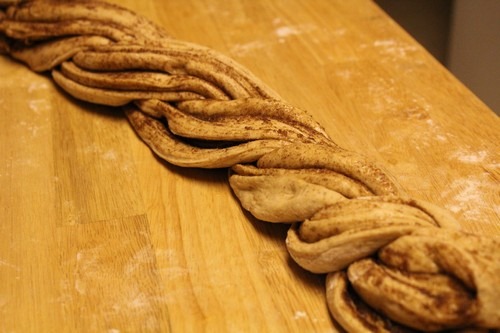 You should now have a two strand rope shape.  If for some reason some of the open roulade layers are pointing down or sideways, carefully turn them so they are facing up.  Gently pinch the ends to seal.

Look at the braid.  If one end looks a little thinner make that your starting point.  If not, just start from either end.  Slowly and very gently, roll the braid sideways (horizontally) without lifting your hands from the table.  You should keep those open roulade layers facing up. Pinch the end delicately. The end result should look like a giant snail shell or a very large cinnamon bun. 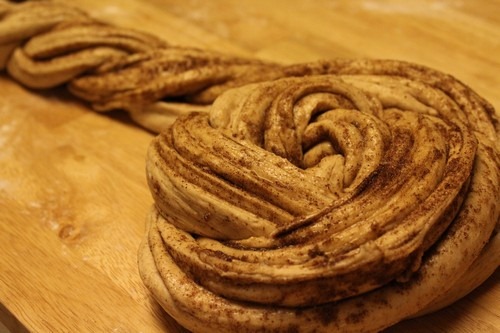 Carefully pick up the braid and place in the prepared spring form.  Keep it flat on the parchment.  The bottom of the braid should set nicely. You may want to sprinkle on more cinnamon sugar at this point, but keep in mind you don't want to cover up the effect of the shaping. 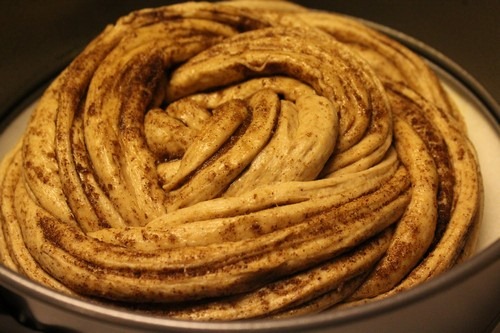 Cover. Let rise until the braid hits three quarters the way up the spring form.  Depending upon the temperature in your kitchen this may take from 20 to 40 minutes or longer. 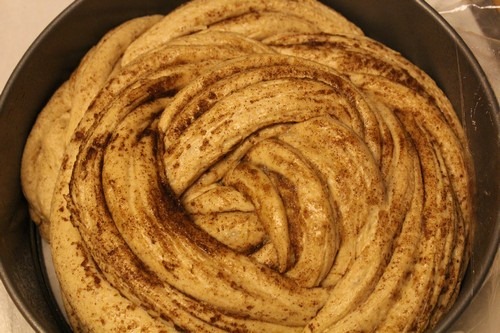 Preheat the oven to 400 degrees F.

Bake at 400F for 5-10 minutes, then lower the oven to 350F and bake for another 20-30 minutes. There should be a decent amount of oven spring.  The bread should rise above the spring form edge. 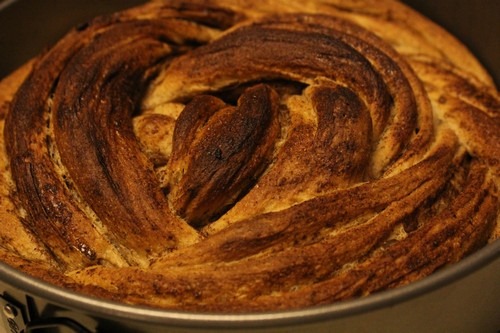 When the bread is out of the oven, drizzle it with the powdered-sugar glazer on top. Let cool on a rack. 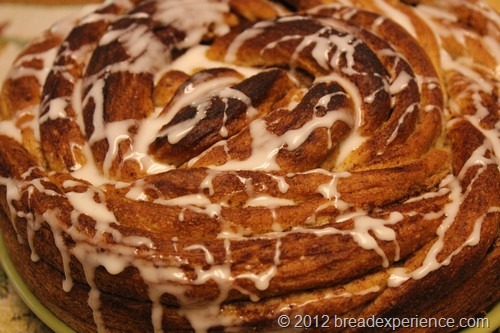 This bread is as about as good as it gets. My son and I had the same reaction. We took one bite and both said “Oh yeah! That’s I’m talking about!” He called it a toned down version of a cinnamon roll – a huge cinnamon roll! 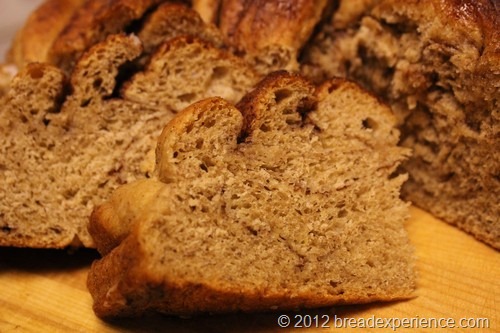